Last week I shared a graphic with that saying on Facebook. I also posted that I may never own a horse like Dixie, but my characters can.

For those of you not on my FB page, Dixie was last Thursday night’s HORSE FIX: Take Me Away, barn name Dixie—World Champion 5-gaited mare. Her owner was on vacation so I got to ride her! What a ride!

As a writer, I can slip into my own imaginary world. I escaped for many years as a reader, but as a writer, I can craft an alternate reality where heroines, who are women I’d like to be, live out their lives.

My Bluegrass Reunion series is a place of escape. I’ve written about a teacher, like I used to be, who marries a stable groom who is actually a millionaire. One of my heroines is the daughter of a millionaire who wants to make her own way in life. She rides like a dream, of course, and trains American Saddlebred horses. In another novel, my main characters are Saddlebred horse trainers. They compete against each other at the World’s Grand Championship at the Kentucky State Fair—something I’ll never be able to do unless I win the lottery and buy a good horse.

Most of my heroines in this series are single mothers. Been there, done that in real life. They have handsome heroes sweep them of their feet, and they all live happily ever after. I’ve done that too, but not in the exciting ways that my characters have done. Come to think about it though, my husband of thirteen years can be romantic and thoughtful. Hero handsome? Well. And I asked him to marry me!

As a writer, it is fun to escape into a world of my own creation where I’m rich and own a 5-gaited champion, where I can ride like the wind, and where all my dreams come true.

Tonight’s HORSE FIX: Barn name Buster, a former champion now in his twenties.  CH A TASTE OF CHAMPAGNE gave me a good ride and he’s a great teacher. I gave him a peppermint for his efforts. 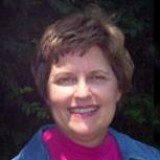